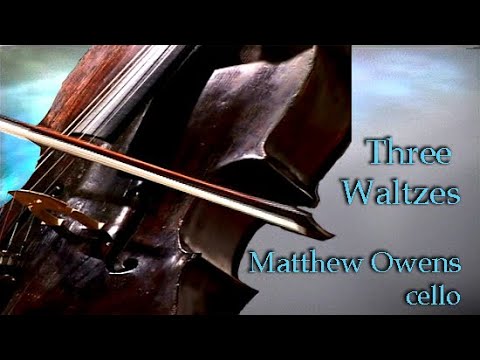 Three Waltzes by Matthew Owens – solo cello
1. Childhood
2. Lovers
3. The Last Waltz
Recorded as part of the Live Oak Concerts series at the
Berkeley Art Center in Berkeley CA
May 21, 2003

All labor donated
For more information:

Biographical notes:
Matthew Owens, whose diverse achievements have earned him critical acclaim from critics and colleagues alike, began his serious study of ‘cello at the age of eighteen, in Berkeley, with renowned ‘cello pedagogue Margaret Rowell. He studied on scholarship at the San Francisco Conservatory of Music and the Juilliard School, later studying with Irene Sharp and Bonnie Hampton. Soon after graduating, he became principal ‘cellist of the Santa Rosa Symphony under maestro Corrick Brown and began a recital career that has taken him in ever-widening circles around the world.